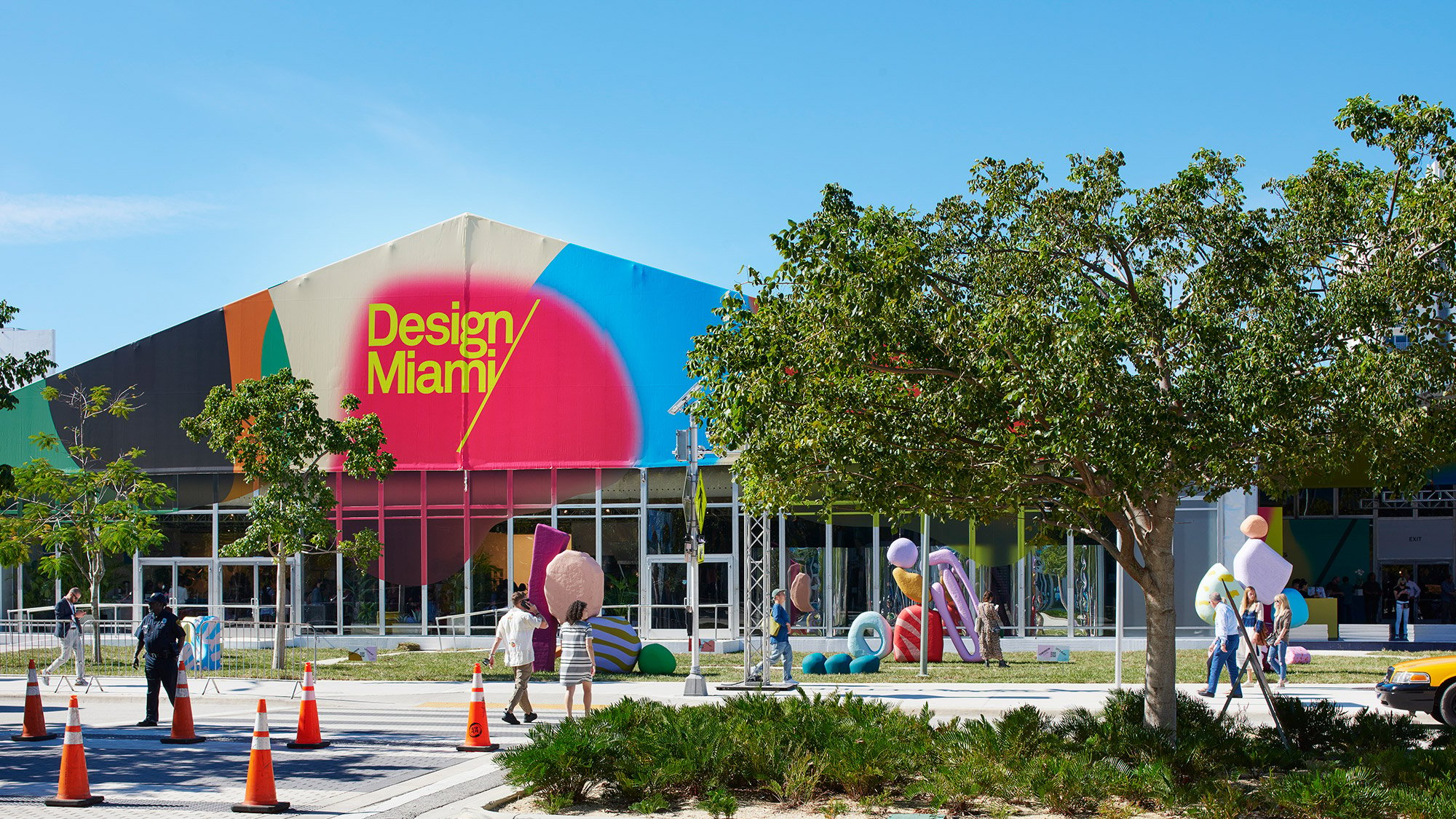 With Design Miami and Art Basel Miami Beach set to begin next week, we’ve rounded up a series of must-see installations and events, from a tequila tasting room designed by Tatiana Bilbao to a Virgil Abloh exhibition put on by Nike.

The event coincides with its sister festival Art Basel Miami Beach. Both of the primary showrooms for the events will be sited on the Miami Beach Convention Center grounds, with a variety of satellite events, performances and galleries showcasing work in the area.

“I think it really is part of this overall equation of establishing Miami as an important contributor to go global cultural dialogue,” said Craig Robins, the real estate developer and art collector who co-founded Design Miami in 2005.

He has since gone on to help develop Miami’s Design District. “There’s always been so much connectivity between Design Miami and the design district,” Robins told Dezeen.

“Germane Barnes has done this amazing installation that you can see throughout the [design district], so there’s going to be a lot of energy around art and design this week, and of course, it will continue through the year.”

This year’s theme – set by Design Miami’s curatiorial director Maria Cristina Didero – is The Golden Age: Looking to the Future.

At the dedicated Design Miami pavilion, a variety of talks and exhibitors will take place from 30 November to 4 December including a panel discussion with Didero, American musicians A$AP Rocky and Erykah Badu, architect Gaetano Pesce, artist Daniel Arsham and others.

Designers, galleries and schools such as Superhouse, the Future Perfect, Savannah College of Art and Design and Ippodo Gallery will also exhibit at Design Miami.

Read on for 14 design events and installations to see during Miami Art Week:

Tequila company Casa Dragones has outfitted a tasting room in the Collectors Lounge of Art Basel. Mexican City-based architecture studio Tatiana Bilbao Estudio lead the design of the space, where visitors can sample the tequila.

According to the company, the design will feature a rounded pink terrazzo bar studded with marble and glass, a chandelier made of Casa Dragones bottles and an art-deco-inspired mirror to evoke “the feeling of being in a ‘cantina,’ a traditional Mexican bar”.

Shaped by Air by Suchi Reddy for Lexus

Japanese car manufacturer Lexus has partnered with the Insititute of Contemporary Art in Miami to present an installation by architect Suchi Reddy in the museum’s sculpture garden.

The installation “will envision the vehicle as shaped by mist and light while illustrating its harmony with its environment”, Lexus said. It is the architect’s first public installation for Miami Art Week.

The Codes c/o Architecture by Virgil Abloh for Nike

In collaboration with VA Securities, American apparel brand Nike will launch an exhibition celebrating the work of designer Virgil Abloh at the Rubell Museum.

Works by Alicja Kwade and Kelly Wearstler for Arca

Kwade will show an installation made from colourful marble spheres outside, while Wearstler will showcase her Nudo collection, featuring 16 pieces of furniture.

“Our presentation with ARCA is an expression of what binds us together as the world converges in Miami to celebrate art and design,” said Wearstler.

Transcendence by Nada Debs for Kohler

“Having the opportunity to design a modern hammam at Design Miami truly embodies the sentiment that well-being transcends all culture,” said Debs, who will also participate in a panel discussion during the festival.

Architect Germane Barnes was commissioned to create an activation for the Miami Design District. Rock | Roll features a number of interactive chairs, displayed throughout the neighbourhood, which draw on the costumes of Miami Carnival.

The installation will include a giant dome and Barnes will hang wind chimes up throughout the neighbourhood.

“Rock | Roll is an ode to the joyful spirit that persists in Miami’s Black communities – a spirit of self-care that is so perfectly embodied in Miami Carnival culture,” said Barnes.

A few of the pieces will also be on view outside of the Design Miami tent.

Artist Pilar Zeta has created a sculpture in the garden of the hotel W South Beach featuring a portal and a series of steps that lead to a large sphere and pyramid.

“The aesthetic and spatial compositions weave together several temporalities – past, present and futures to come – and are rooted in ancient architecture,” said Zeta.

Fashion company Bottega Veneta will show a collection of chairs by Italian architect Gaetano Pesce at Design Miami and in its showroom in the Miami Design District.

The chairs were initially unveiled at a Bottega Veneta show at Milan Fashion Week 2022. The installation will coincide with a talk by Pesce at the festival on 30 November at 2 pm.

Called Pink Meditation Buoy, it will feature a series of pink forms planted in the ocean and visible from the shore of Faena Beach.

Ares House by Daniel Arsham for the Row

Designer Daniel Arsham will be among the 30 exhibitors showing at the Row, a showcase of metaverse designs brought to “real life” via 3D projection mapping.

Fashion company Dolce & Gabbana is set to present a series of design objects at its Miami location in partnership with Luxury Living Group.

“The patterns of the Collection’s themes come to life on furniture, mise en place accessories, textiles and decorative objects that evoke a story of love and hospitality, passion and beauty, and the art of living one’s daily life,” said Dolce & Gabbana.

Designer Craig Barrow has transformed the interior of a warehouse in Miami for a music event put on by web3 company Refraction DAO.

The installation and music event will occupy a warehouse in Little Haiti in Miami where there will be panel discussions during the day and music at night, before moving over to the Frost Science Planetarium on 1 December.

Wine company Château d’Esclans has teamed up with The Surfrider Foundation to lead a clean-up of Miami beach on Monday 28 November.

The first of what the company says will be a yearly event will “join together with the Art Basel team, the leadership team from Surfrider, gallerists, Miami locals, city officials and art enthusiasts from around the world for this inaugural local cleanup effort”.

Dreamcloud by Nina Magon for Cosentino

The installation will use eight slabs of stone from Cosentino, as well as lighting elements by Studio M Lighting.

Design Miami 2022 takes place from 30 November to 4 December 2022. See our Dezeen Events Guide for information about other architecture and design exhibitions, installations and talks.

The top photograph is by James Harris.

Dezeen is on WeChat!

Click here to read the Chinese version of this article on Dezeen’s official WeChat account, where we publish daily architecture and design news and projects in Simplified Chinese.